We are always happy to see examples of how TUIOFX is utilised. Chegini Mohammad from TU Graz send us a very nice video encompanying their paper “Interaction Concepts for Collaborative Visual Analysis of Scatterplots on Large Vertically-Mounted High-Resolution Multi-Touch Displays” .

TUIOFX is used here on a 84 Inch 4K eyevis multi-touch surface to enable collaborative visual analytics. In the video you can see how applying our Task-Based Focus concept enables smooth collaboration among the two users.

Their paper presented at FMT 2017 can be found here.

Last week we presented a full paper on TUIOFX at EICS 2017 – The 9th ACM SIGCHI Symposium on Engineering Interactive Computing Systems in  Lisbon, Portugal. The paper, which provides more details on the engineering and implementation of TUIOFX  can be downloaded in the ACM Digital Library following this link.

We started publicly releasing TUIOFX binaries via GitHub. A jar of the current version 0.10.4 is available for download on our GitHub page, together with some instructions on how to get started. We are happy to receive your feedback!

In this article, I want to share my experience of adding multi-user multi-touch capabilities to the JavaFX graph editor library developed by TESIS DYNAware. Shared interactive surfaces like tabletops or interactive walls are considered to improve the group collaboration and communication in office and educational settings. Still today, applications for shared interactive surfaces that support productive tasks such as document editing are rare. 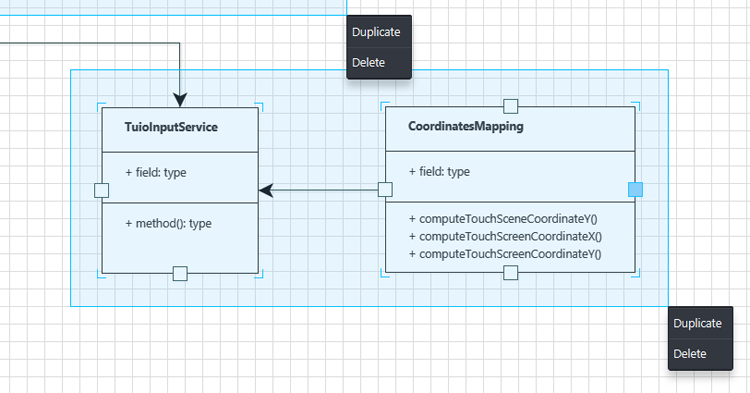 Built on top of JavaFX, TUIOFX aims to support the development of multi-touch applications involving multiple co-located users. Therefore the goal of this project is:

As a document editing tool I chose to build a simple graph editor for UML class diagram using TUIOFX and this JavaFX graph editor library.

END_OF_DOCUMENT_TOKEN_TO_BE_REPLACED

We are presenting a poster on some of the novel and unique concepts behind TUIOFX at the leading HCI conference, the  CHI 2016 Conference on Human Factors in Computing Systems in San Jose, USA.

Inspired by the nice look of the gauges in Gerrit Grunwald’s blog post Harmonic Code: Building a simple Dashboard using Medusa I felt like trying out how his Medusa gauges library would look like on a Shared Interactive Surface with  TUIOFX. I started from the example in the blog, but quickly added some interactive elements in form of some sliders, to control the gauges. The design of the gauges SlimSkin and the TUIOFX-Widget styling work together quite nicely. 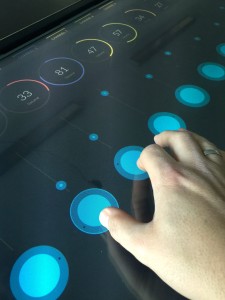 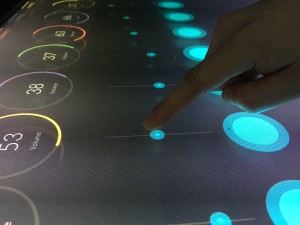 To go a little further, I put together a quick UI mockup for a mixing console. In order to have some sort of knobs as control, I remembered a blog post by Jasper Potts, where he developed a knob skin for the Slider control. While — due to some API changes in JDK 8—his code did not work out of the box, it greatly helped me to quickly come up with an own Knob control implementing custom Skin and Behaviour. 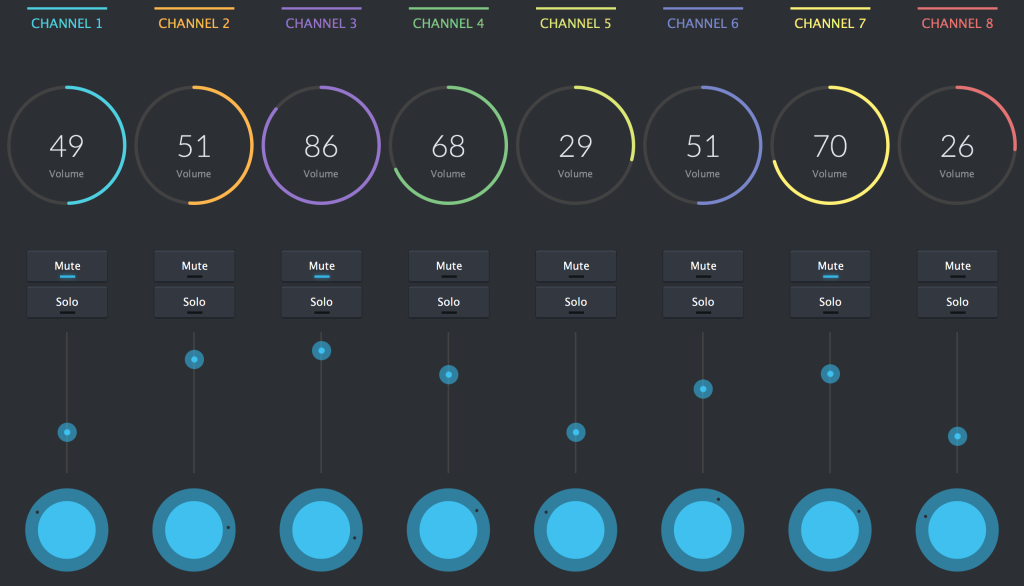 In order to easily share documents to an Interactive Surface we implemented an AirPrint PDF Printer in pure Java. It uses the JmDNS library to announce a PDF-capable  AirPrint-Printer to iOS- and OS X-devices in the local network via Apple’s Bonjour zeroconf-service. When a device discovers the printer and starts a print job, the incoming requests are handled by a HttpServer. The server processes the incoming IPP (Internet Printing Protocol) requests and accepts incoming print jobs. The document in the response body is passed to Apache PDFBox in form of a byte[], gets loaded into a PDDocument, and (the first page) is rendered into a BufferedImage. The document is displayed in form of an ImageView — with TUIOFX it is easily zoomable, rotatable and movable on our TUIO-enabled multi-touch table.

See this little demo video of how it works:

One major functionality of TUIOFX is the provision of touch input from TUIO-enabled 1 devices in form of  regular JavaFX mouse and touch events. For the developer these events are indistinguishable from those produced by the OS.  Recently, we added support for the full press-drag-release gesture to TUIOFX, for which we unfortunately had to sacrifice this general compatibility principle. Until now, TUIOFX was only simulating the simple press-drag-release. The difference between both mouse-based gestures is described here. Briefly, the full press-drag-release gesture is used for dragging a node to another node, for instance, “for connecting nodes by wires” etc. 2.

To enable simultaneous multi-touch multi-user interaction, TUIOFX uses its own gesture recognizers to detected touch gestures and for emulating mouse gestures like the full press-drag gesture. However–as far as we see–JavaFX does not provide a way for TUIOFX to be aware that the startFullDrag() method was called.

TUIOFX-Core creates multiple gesture recognizers for each graphical element touched on by the user as shown in the following illustration.

But what about using a gesture source node that is different from the actually dragged Polygon node?
Sometimes you want the gesture source to be the parent node (Pane) of the dragged node (Polygon), for instance, to ease the geometrical computation. Calling TUIOFX.startFullDrag(pane) will indeed define the Pane as the gesture source, but it will also try to trigger the press-drag gesture recognizer instance of the Pane which, however, does not exist at this point. This is because TUIOFX-Core only creates gesture recognizers for graphical elements touched by users, as already mentioned.

Therefore, it should be possible to call TUIOFX.startFullDrag(pane) to identify the pane (the parent element of the Polygon) as the gesture source while still triggering the full press-drag gesture recognizer of the Polygon.
To achieve that, the TUIOFX.startFullDrag(pane) triggers all the full press-drag gesture recognizers of the children of the given gesture source (Pane). In this way, only the child node that has actually sent the MouseEvent.DRAG_DETECTED will start a full press-drag-release gesture.

We are very happy that our poster on TUIOFX for the German HCI conference Mensch & Computer 2015 was awarded with a Honorable Mention Poster Award at the conference.

We are happy to give a demo of TUIOFX at the INTERACT 2015 in Bamberg, Germany in September and a few days before to present a poster at the German HCI conference Mensch und Computer 2015 in Stuttgart, Germany.